With a keen eye for user experience (UX) and the potential of Internet of Things (IoT) for consumer products, the RAD Propulsion team approached Bluefruit Software to help with their initial UX research and software development work on a concept for a future product line. Bluefruit supported the RAD team to provide the high velocity the project needed to get the early results required to prove the technical feasibility of RAD’s product innovation. 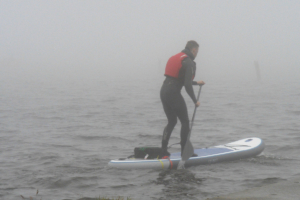 In these early research and development stages, learning from prototype iterations was a vital element of the R&D work undertaken by Bluefruit. Taking a Lean UX approach to the work, which fitted well with our existing Lean-Agile practices, it took just one two-week sprint to achieve a working prototype.

The initial prototype was built on Raspberry Pi (using Python) for speed, while RAD decided on its final hardware mix in parallel. By the second sprint, the Pi prototype was out on the water and ready for user testing.

User testing safely in a live, in-field environment (alongside people from RAD), we gained valuable data early into the project. As a result, our team was able to gain user testing insights almost immediately and lay the foundations for robust device analytics and metrics based on sensor logs.

Also, due to the in-field testing setup Bluefruit developed, our software engineers were able to respond to user feedback lakeside, adjusting the software on the fly instead of taking kayaks and paddleboards out of the water and back to the office to adjust. Responding with such short feedback loops meant that we could maximise the time and conditions available.

Easy shift to an embedded environment 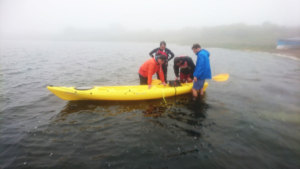 Once RAD settled on their production hardware choices, the team used the final sprints to write the production software in C++, making it ready for a true embedded hardware environment.

Moving the project to production hardware meant that the team could finesse motor controls that could not be fine-tuned using Python and Raspberry Pi devices because the prototype environment was not an actual embedded environment. It also had the added benefit of helping to test that the hardware was fit for purpose, essential when working in a Lean-Agile way with both software and hardware.

RAD Propulsion’s trust in Bluefruit Software enabled a fast-moving R&D project to benefit from a dedicated team that helped RAD discover the real potential of its product idea, ready for the next phase of development.

Are you looking to develop a new product or have an existing one?

For over 20 years, Bluefruit Software’s embedded software engineers and testers have worked with many different clients. Our work has included software development for clients producing products across manufacturing, scientific instruments, medical and more. No matter your project stage, we can help.

Set up a call with our engineers
lean-agile
series

Users first, features second: how to bring User-Centred Design to your software project

How do you reduce design time by 75%, development time by a further 33% and get products to market twice as […]

Bluefruit Software has been delving into edge AI over the past 12 months. Our Audio Classification Equipment (ACE) research and development […]