What’s stopping you from having a career in software testing or engineering? We take a look at six tech career myths that we’ve encountered and why they shouldn’t stop you from a career in one of the fastest growing sectors in Cornwall. 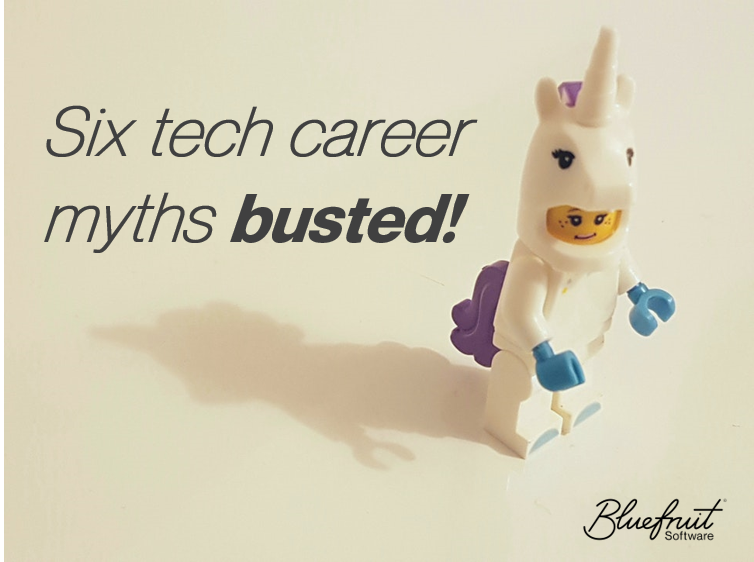 Myth #1: You need to have been coding since you were five years old

With so many kids being encouraged to learn to code at school today, you might mistakenly think that you need to have been coding from a young age in order to get a job in tech.

But how did we get here? People probably remember Information Communication Technology (ICT) lessons where they were subjected to endless tutorials on how to use Microsoft Office. The curriculum has since improved in UK schools and coding is on the agenda, but there are generations of learners who didn’t have any encouragement towards learning to code or the chance to. And today there’s the impression that anyone who is good at coding must have been learning from an early age.

Your chance to switch to tech isn’t lost, just because you weren’t an ICT whiz in school. If you want to work in software engineering or testing, you don’t need to have been coding for most of your life. What you do need is enthusiasm to learn and discover, regardless of your age.

Here at Bluefruit, our tester role doesn’t require any testing experience and you don’t need to know how to code.

Of course, if you are interested in one of our software engineer roles coding experience is required. But we hire at a wide variety of levels and often take on juniors who might not have years of coding experience, but who make up for it in their passion to skill up quickly and their desire to learn from the senior engineers on the team. Several of our software engineers actually got started by taking part in code training through Mission to Mars, a code training initiative run by Software Cornwall.

Verdict: False. There are a number of jobs at Bluefruit, where knowing how to code isn’t even a requirement. And while a lot of our developer roles require some level of coding it’s never too late to start.

Gender and overall diversity balance are a huge issue in technology. From videogame development to deep-sea submarines, the genders of people who work in technology are often heavily skewed towards being male. In fact, the need for gender balance in technology development is something that we pointed out in our International Women’s Day post.

But that wasn’t always the case. In fact, it’s only a recent phenomenon. Some of the first trailblazers within the software industry were actually women from a variety of different backgrounds.

Here’s the thing: not every tech business is all bros. Bluefruit used to have a big diversity problem, but after doing a lot of work to introduce non-bias hiring practices to our recruitment process, over the last two years, women have made up 43% of our hires and we now have two women on our board of directors. We are also attending Women of Silicon Roundabout in June with several Cornish businesses and we have a number of our engineers coming with us. We’ll be taking part in talks and promoting Bluefruit roles hoping to continue to inspire more women to apply for roles across the company.

Verdict: Maybe⁠—it depends on where you work and slowly but surely things are getting better

Many of the people who work in software engineering do have a university-level qualification in an area of computing. That isn’t to say that you need to have a Bachelor’s degree to work in tech. According to a 2018 survey by Stack Overflow, which questioned 100,000 developers worldwide, 25.3% of professional developers do not have a Bachelor’s degree. They also found that 87% of professional developers had taught themselves a new language, framework or tool without attending a formal course.

Bluefruit has many colleagues who do not have a university-level education or who have degrees in other sectors such as Maths and or Sciences. For us it isn’t about what level of study you achieved, it’s about your experience, skill, and aptitude to learn.

Myth #4: We’re in a tech bubble, none of this is going to last

The tech world of today is very different from the bursting of the dot-com bubble in March 2000. For one, general technology has a far greater presence in our everyday lives than the internet did back in 2000. Secondly, even if you hear about the multi-million or billion dollar valuations happening for tech companies today, it’s still nothing like the speculation that happened in the 90s, as David Trainer writes on Forbes. Trainer also points out that while some smaller bubbles may burst, our tech sectors are here to stay.

For a company like Bluefruit that has been “on the scene” for 18 years, the idea that there’s a bubble waiting to burst seems unrealistic. Especially when our company has seen year-on-year growth in a sector that is becoming more and more a part of everyone’s lives. From cars to medical device implants: embedded software use is continuing to grow. We expect to be around for another 18 years.

Verdict: False (at least within the Embedded space⁠—we can’t speak for Facebook).

Myth #5: The tech industry is all about crunch time

Long hours. High stress. Working long into evenings and weekends. There is a perception that if you work in tech then you’ll have to put up with crunch time. There are many companies involved in software development where crunch mode is the norm on most, if not all projects. This is despite evidence suggesting that once coders are working more than 40 hours a week, the quality and amount of output actually decreases as productivity stalls.

Beyond a lack of productivity, crunch can lead to burnout and serious mental health issues, something that the industry has realised it needs to handle. Last year a survey by Blind, a workplace community app, asked 11,000 tech workers about burnout. Across 20 different tech companies, 57% of respondents reported suffering from the effects of burnout.

Crunch is something that we don’t believe in at Bluefruit. Unhappy, unrested, stressed out testers and software engineers do not make for quality results. Overtime is a no go; your weekends and evenings are yours. And because people are people, and still get stressed working projects no matter how well we manage them, we work hard to provide our colleagues with help to de-stress.

Verdict: It’s a high possibility, but not at Bluefruit!

Myth #6: You can’t be a big tech company in Cornwall

When we go to conferences, speak with the media, interview potential job candidates or talk to potential clients, we encounter one persistent myth: that to be a tech company in Cornwall, you must be small. That somehow, being in Cornwall means that there are three of you in an office working on a single project and that we’re just here for the surf and pasties (some of us are, but that’s not the only reason Bluefruit exists).

Bluefruit is a multi-million-pound company working with innovative global clients and with a team of 56 at the time of writing. We love being in Cornwall and believe in our local community. We find it hard to imagine being anywhere else in the world.

We’re always on the lookout for people to join our teams. Check out our careers page for our latest tester and engineer roles