Are you wondering why, like us, a smart clothes dryer is sending and receiving over 1GB of daily traffic to an EC2 instance on Amazon Web Services (AWS) every day?

Over the weekend of 10-11 April 2021, there was a flurry of comments to a post on r/smarthome, a Reddit subreddit dedicated to smart home devices. A Redditor had posted about finding out that their LG dryer (a DLE3500W model) was using a hefty amount of their home internet bandwidth, even though it’s just a smart clothes dryer.

Redditors replying to the original post were quick to suggest something malicious was going on with this IoT product. After all, there’s a story about security issues with IoT devices every week.

(Case in point on security: while writing this blog, news broke about a series of vulnerabilities involving domain name parsing in DNS implementations for the TCP/IP stack (dubbed Name:Wreck) that puts IoT devices at risk.)

But has this smart device been hijacked for use in a botnet or mining cryptocurrency? Or is something else at play?

And what can you do to help embedded software development teams prevent products from behaving in this way and causing issues for users and your business?

Before we get deeper into the details of the dryer, let’s dip our toes into User-Centred Design for a second and take a moment to think about the end-user here.

With any consumer smart device that uses the internet at some point, that data, that traffic, needs to go across various networks, especially if the product connects with a cloud-based platform.

How big of an issue could any of these be? Considering our 1GB dryer example, the most important thing to remember is that hardly anyone has high speed internet connections in their home. Squeezing 1GB of data you weren’t expecting to be sending or receiving can eat into what’s available for the platforms and devices you do want to be using that connection.

In 2019, globally, only 5% of people had access to gigabit internet.

And there hasn’t been much progress on this figure in the past two years. Do you know anyone with gigabit internet at home? No one on our team does.

Even Starlink (Elon Musk’s satellite internet venture) will only serve up to 150Mbps internet to users who don’t live in urban areas.

Now that you understand why having a dryer consuming vast amounts of bandwidth is a problem let’s go back to the clothes dryer.

Without examining the dryer in question and sniffing its data packets or reverse-engineering the contents of those packets (all data sent to and from AWS must be encrypted, it’s a policy for using its infrastructure), we can’t find out for sure what’s going on. But there are three likely suspects, and two are more likely than the first.

Again, we can’t say for sure which is happening here, but we can look at what each means for end-users and your product and business.

The most popular option put forward in the discussion we saw was that malicious code was at play. But why do we think it’s the least likely scenario?

The second clue is that the size of the data overall. It doesn’t reflect the size usually involved with an IoT product that has become a zombie device as part of a botnet involved in Distributed Denial of Service (DDoS) attacks.

Conversely, it’s unlikely to be anything to do with crypto mining. When a hijacked IoT device is used in crypto mining, it doesn’t normally involve large amounts of data for an IoT device.

Of course, we can’t rule out a malicious problem, as we haven’t examined the product involved. It not being malicious is just a best guess.

However, just because this is unlikely to be a security issue doesn’t mean you shouldn’t be thinking about the overall security of an IoT product you’re developing.

In the first half of 2020, there was a 50% increase in cyber-attacks on IoT devices.

Meanwhile, prosecutors on cybercrime cases are starting to look further up the supply chain for who to hold responsible when serious incidents happen.

So how can you work to ensure your product is developed and programmed with security in mind?

Three ways you can work to secure IoT devices during development

There are several primary considerations during software development that can help you ensure that you’re minimising the risk of an IoT device being compromised:

There’s more you can do, and you can read about it in our article on balancing connectivity and security in IoT and IIoT.

But what about the more likely scenarios at play here with the dryer?

Again, we don’t know if this is happening with the clothes dryer, but sensor logs could be behind the 1GB data puzzle. Sensors are a vital part of embedded systems in IoT, enabling physical events to be monitored by software and acted upon by the user or the smart device itself.

For this sensor information to be something that users can interact with, at some point, it needs to be interpreted in a user interface on the device itself or in an app on maybe a smartphone. In the case of a fitness band, that interaction might look something like this: 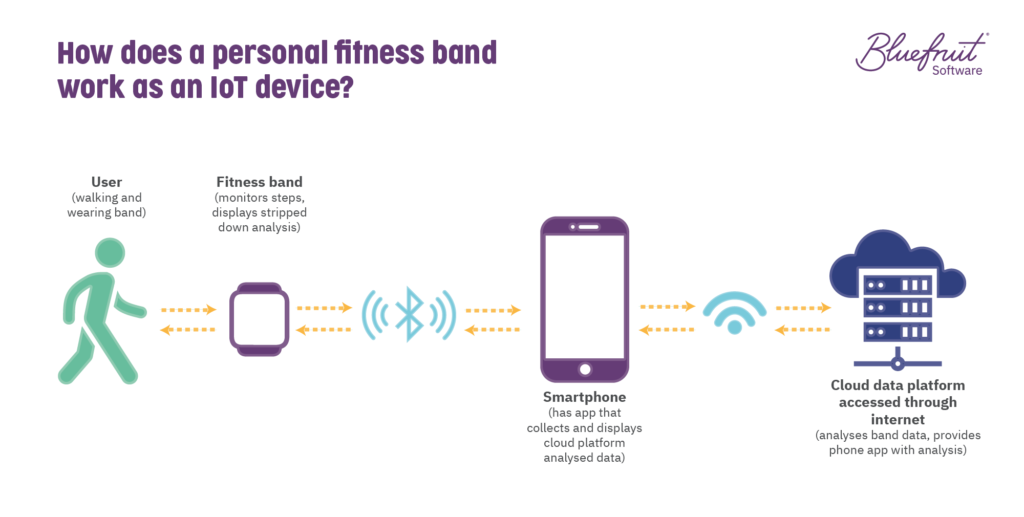 A series of replies to the original r/smarthomes post also suggested sensor logs could cause the mystery 1GB of data.

The theory was baulked at in the replies, but it’s not as improbable as you might think.

Once you start going from machine code to something more human-readable (like XML or JSON) and not a binary format, data can begin to balloon in terms of the memory it takes up. Then if you’re sending and receiving that data many, many times in a short period, it can add up. 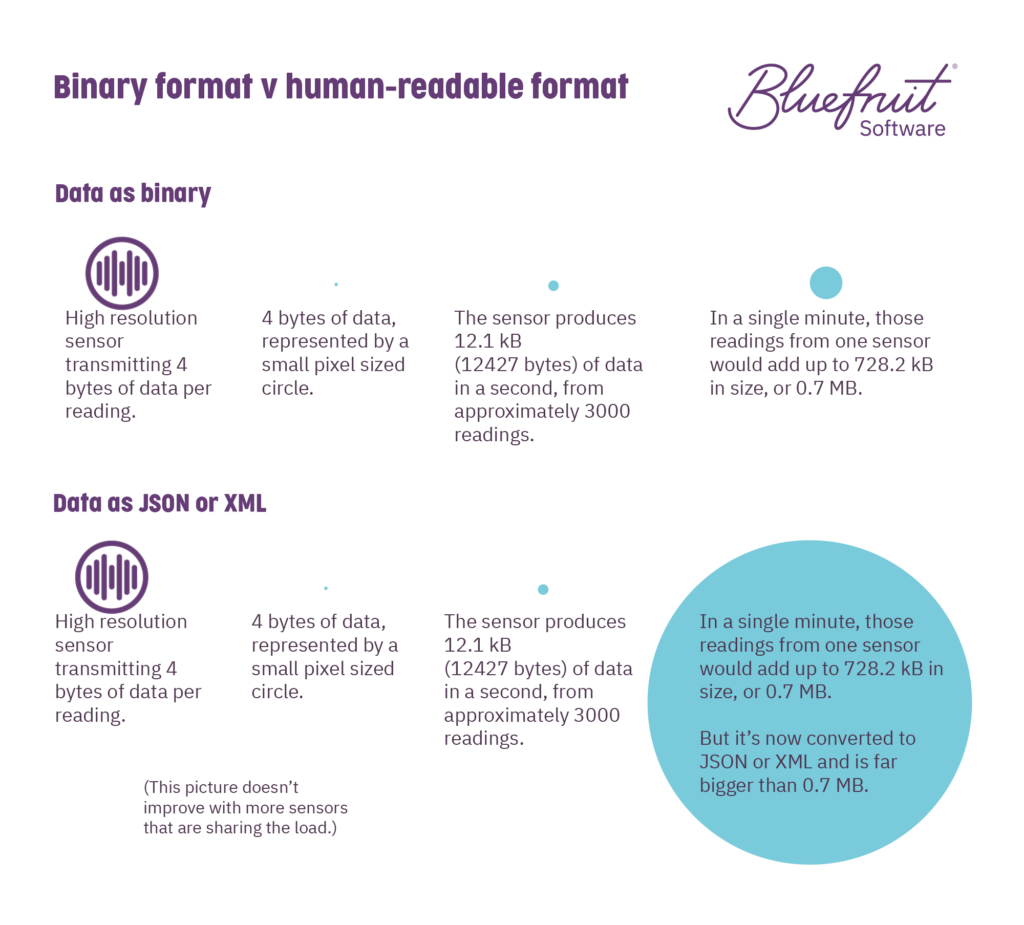 In the embedded software world, this tension between binary and text is already well known, especially in green software engineering and ultra-lower power environments.

Using text rather than binary:

Why have logs at all?

For a business, logs can be handy for gathering usage data that can further product development and new R&D (depending on local privacy agreements laws).

For end-users, it’s the display of this information in meaningful ways that adds to some smart devices’ functionality.

But at some point, your business will pay for data bloat in its IoT products

If you’re using IaaS (Infrastructure as a Service) products like AWS, it pays to keep data costs down depending on how many active product units send and receive data. Even self-hosted solutions have overheads for sending and receiving all this data if it’s not processed locally by consumer units.

Your business will pay for bloat at some point.

Verdict: there’s a reasonable chance that sensor logs are behind that 1GB.

Still, we’re not sure that sensor logging could be behind this excessive bandwidth use. But it’s a problem you can avoid.

Here are a few questions to ask your software and product teams:

There’s more your team can do but considering the above is a good start.

Still, we don’t know for sure if sensor logs are behind the mystery with the LG dryer.

Now, on to our final suspect.

The evidence that this is a firmware-over-the-air (FOTA) process update going awry comes from the discounting of a security issue, plus the repetition of what’s happening, and the overall size of the data involved. It’s a theory suggested in the replies to the original post on r/smarthome, and it’s a good theory.

It’s not uncommon for a firmware update process to fail and then loop back to trying again. That problem is common for over-the-air (OTA) updates without sufficient measures to handle it.

In this case, the user is lucky that their dryer appears to still function as a dryer. Why lucky?

IoT has seen a rise in updates bricking devices and devices needing replacement at a cost to businesses. There have also been devices otherwise rendered unusable by updates until a fix is applied. Bouncing back from this kind of reputational damage can be tricky.

But a great benefit of smart devices is the ability for software teams to push updates to them. Being able to force updates is also crucial when fixing critical security holes in software.

Equally, this means there’s a real need to perform effective embedded software testing to check that updates don’t break devices or can be done in the first place by users.

There are ways software teams can make updates more accessible and less likely to fail. As well as having a robust testing process, measures can include:

Again, there are more measures that software and product teams can take to ensure firmware updates and other patches are less likely to fail. It also depends on cost and customer support availability and whether some options are more practical than others.

We still don’t know what’s happened with the data-hungry smart dryer, but its behaviour should be considered a bug and certainly not a feature.

With the increasing risk of legal action, risk to reputation, and the ongoing business costs from poorly configured software for smart devices, it makes sense to reduce these business risks during the software creation process.

When you want to speak with a software and testing team that makes a point of high-quality embedded software development on every client project: reach out to Bluefruit Software.

(Note: This blog’s title is from the idea that 68 YouTube videos are the same as around 1GB, based on each video being around four minutes each in length and are MP4 files.)

How to balance connectivity with security in IoT and IIoT

IDC estimates that there will be 55.7 billion connected IoT devices globally by the end of 2025. Consumer devices with IoT […]

What is Embedded Linux and when should your device use it?

Why Embedded Linux? Twenty years ago it was not deemed a viable solution for embedded systems. Nowadays, it’s all the rage. […]