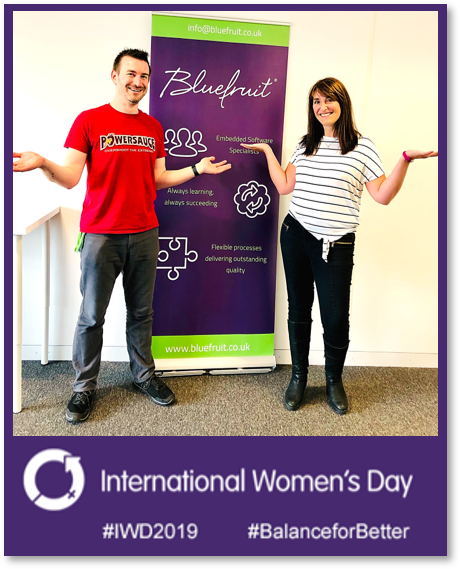 Today is International Women’s Day and this year’s theme is #BalanceforBetter. So what does “Balance for Better” mean in technology and for a business like Bluefruit?

Why we need gender balance in technology companies

Gender balance is an issue across all our lives, it affects business, government, wealth, the media and so much more. The lack of gender balance in many industries has led to products and ways of working that can skew against particular genders. Within the Tech sector specifically, there are a number of current examples of where a lack of gender balance has created real issues for people, illustrating why #BalanceforBetter is so critical.

Alexa are you biased?

Take for instance the rise in voice assistants. The AI of popular voice assistants such as Alexa, Google Home, and Siri have been trained on mainly one type of voice. According to Rachael Tatman at the University of Washington

“Historically, most collections of speech and language tend to be more male and white and middle class.”

This means that devices often don’t work as well for female voices or people who are not Caucasian. While many voice assistants default to a female sounding assistant, they’re not actually that great at listening to people with that type of voice.

The good news is that if you’re interested in helping to bring better balance to voice assistants, you should stop by Mozilla’s Project Common Voice. They’re looking for speakers and listeners to help improve the voice datasets available across a variety of languages.

There is also growing concern and evidence that the prevalence of female-voiced assistants could help perpetuate or worsen gender stereotypes. How can we stop this? Design choices are key to ensuring there is balance within voice assistants.

An unbalanced world is an unsafe world

A recent article by Caroline Criado-Perez for The Guardian examined the dangers faced by women because they’re not even considered in the design process for many everyday objects. From cars to mobile phones to bags of cement: the processes behind the design and testing of objects often don’t think about women. The consequences of this can be life-threatening, with the design of many cars meaning that women are 47% more likely to be seriously injured in a car crash.

The International Consortium of Investigative Journalists has looked into whether medical device failure and risk skews towards women more than men, and suggests that faults are more likely to affect end users who are women. In particular, they highlighted how the Thoratec HeartMate® II Left Ventricular Assist System (LV AS) was three times more likely to cause a stroke in women during pre-approval studies than it was in men.

What gender #BalanceforBetter means for Bluefruit

Bringing gender balance to tech companies means that a business like Bluefruit has access to all the varied ideas and experiences that come from employing people of different backgrounds. It means we can look at coding from more than one perspective and ensure that all end users are catered for.

We might not be there yet in terms of having an even split in the company, but we pride ourselves on recognising that we can do better. And we are. Here are three things we’ve done and are doing to help create Balance at Bluefruit:

1. In January this year we announced that Businesses Development Director, Caitlin Gould is now an Executive level Director on our Board. According to the Guardian, within the tech sector,

“Almost two-thirds of boards, and more than 40% of senior leadership teams have no female representation at all.”

We are proud to have two women on our board and look forward to welcoming more women into leadership positions across the company.

2. We continue to practice Non-Biased hiring to ensure fairness across all applicants when applying for roles at Bluefruit. We wrote more about how we remove bias from hiring, here.

3. This June, Bluefruit will have a stand at Women of Silicon Roundabout along with several other Cornish businesses. We will be there with a number our of engineers, taking in the great talks and trying to promote our roles to top UK tech talent. Our goal is to try to increase the number of women that apply for roles at Bluefruit as we feel this is a first critical step towards a more balanced team.

And this is only the beginning.

If you’d like to learn more about women in technology, then please check out our previous posts:

While over the past 2 years 43% of our hires have been female, currently, only 5% of applications for our software engineer roles are from women. We would love that figure to be 50% so that there is more balance across the company! If you or any women you know is interested in a new role, please have a look at our current vacancies. We are looking for everyone from Junior Software Engineers up to Senior Software Engineers. Check out our careers page for more information on current job vacancies at Bluefruit.