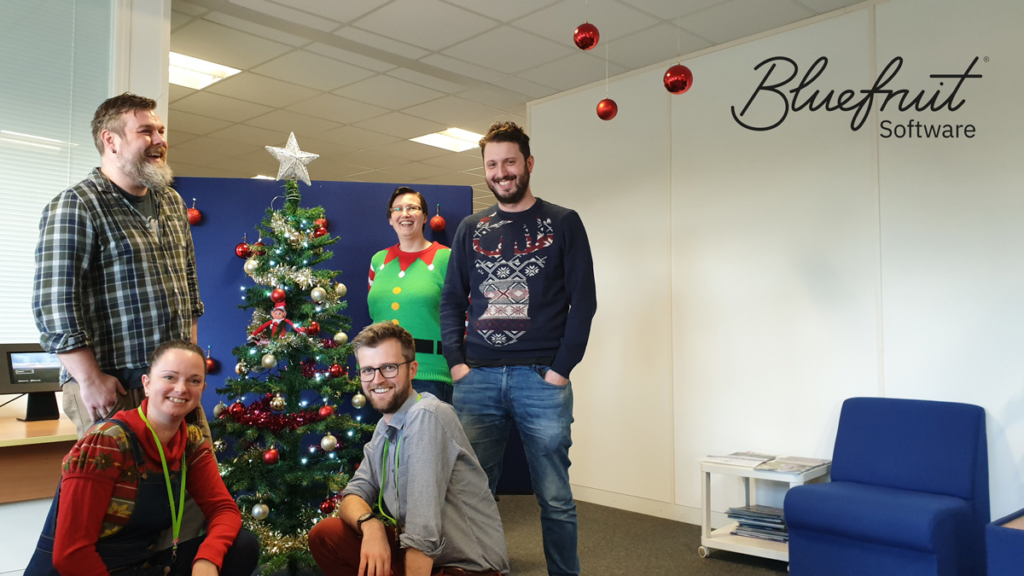 We can’t quite believe that 2019 is almost over! This year’s been packed for us. We took on more clients than before, redesigned our website and rebranded, took on another floor at the Gateway Business Centre, grew from 52 people to 73, went to Women of Silicon Roundabout and Agile on the Beach, drank too much coffee and petted many dogs.

We also formed an Employee Ownership Trust and signed the Tech Talent Charter.

So, here are some of our top posts from this year that you may have missed.

This year, Bluefruit Software took the big step of becoming Employee Owned. Now, employees own 51% of Bluefruit, and the company formed an Employee Ownership Trust (EOT) to govern this.

We formed an EOT in the same year as us winning several awards. We won Best Employer of the Year and Growth Business of the Year at the Cornwall Business Awards, and Best Tech Workplace at the Tech South West Awards. So yes, we believe that supporting our people is essential and that it has enabled our astounding growth and will continue to do so.

Hear from our Founder, Paul Massey, why he thinks this is great for Bluefruit and our clients.

The Rust programming language has been gaining ground as an alternative to C and C++. But why would anyone want to consider using a language that’s only ten years old and has far less support than older languages?

With the rise of connected systems, security is a growing issue in embedded. Long-running quirks of C and C++ present security and safety issues for developers of newer systems and those migrating away from legacy hardware and software.

Find out how Rust could transform low-level code.

Why Unit Testing is awesome

The emphasis in Unit Testing is on checking sections of code during development, rather than looking at just the whole in testing. While this seems counterintuitive at first, it means that in later work or refactoring, when a section of code fails a test, developers know immediately what has happened.

See why Unit Testing should be in your development process.

Aiming to improve digital access across the whole of Cornwall and the Isles of Scilly, the Local Digital Skills Partnership (DSP) is a government-funded initiative.

Digital access means training and skills development across all levels and helping digital employment in the duchy.  The DSP is bringing together the public sector, educators, businesses and non-profits to create a lasting positive impact for Cornwall’s technology sector.

(And in November, our very own Caitlin Gould became Chair of the Local Digital Skills Partnership in Cornwall and the Isles of Scilly.)

Learn more about what the Local Digital Skills Partnership means for you and Cornwall.

Waterfall is never the answer

Our April Fool’s this year looked at Waterfall in software development. While the first half of the blog appears to be a serious take on this form of project management, we quickly cut ourselves off and explained we’re sticking with Agile and why.

With the recent revelations around the TSB IT meltdown, it’s a good thing that Bluefruit is a Lean-Agile business. The processes behind the IT meltdown were very much Waterfall based.

Discover how Waterfall is never the solution to developing quality software.

What’s the difference between Proof of Concept, Prototype, MVP, and MMP in embedded software development?

Proof of Concept (PoC) and Prototypes have been in traditional approaches to embedded device development for decades. But the concepts of Minimum Viable Product (MVP) and Minimum Marketable Product (MMP) are newer.

So, what does Proof of Concept, Prototype, MVP, and MMP in embedded software development look like? How can they benefit your product and ultimately, your end-user? What questions are these techniques trying to answer? In our blog post, we gave some workable definitions and looked at the differences between these development stages.

Read how PoC, Prototypes, MVP and MMP can take your device to the next level.

We’d like to wish all our colleagues, clients and friends Happy Holidays.

Looking for a change of scenery?

We’re currently recruiting for Software Engineers of all levels. If you want to switch things up in 2020, why not apply for a job at the Best Tech Workplace in the whole of the South West.

Find out more about working at Bluefruit.