As 2019 was ending, Bluefruit Software became employee owned. Today, employees own 51% of the business through an Employee Ownership Trust (EOT). Our Founder and Director, Paul Massey, has already talked about why we formed an EOT.

In this post, we’d like you to meet our EOT trustees; specifically, our two employee trustees and explain how colleagues elected them.

What does an Employee Ownership Trust do?

There are several responsibilities that the Trust oversees. Their core mission is to ensure that Bluefruit Software operates in the interest of its employees.

One of the main areas of business the EOT does input on is bonus distribution. Companies that are employee owned and have an EOT can distribute up to £3600 in tax-free bonuses to each employee per tax year. This is, of course, dependent on the performance of the business and affordability, but is a significant incentive from the Government, who view Employee Ownership as a very positive thing.

Our EOT has five trustees now, as suited to a company of our size. Our members are:

Judith and Richard became trustees after we held an election for the two colleague trustee positions. They will hold these positions for between one and three years alongside doing their day jobs.

Bluefruit decided to hold a formal election. We had seven team members come forward as candidates, each with different backgrounds and experiences. They each created a bio and an explainer on why they felt they would be excellent representatives of the employees in the EOT.

We ran the election campaign on our company Slack, in-person and through email. We encouraged everyone to reach out to candidates to ask them questions around the trustee role.

We decided to choose the two employee trustees using a fair election system. The method? The Single Transferable Vote (STV). We wanted to avoid the pitfalls of the more traditional “first past the post” system currently used in National elections. The Alternative Vote (AV) was discussed, but we realised that it wouldn’t deliver proportionate representation. Having colleague trustees who represented everyone was essential to us. So, we decided on STV.

This video is an excellent explainer on how STV works:

To run the election with STV, we decided to use online STV service Choice Voting. After testing it out and with some help from Choice Voting, we started our poll on 11th November 2019.

Over the course of four days, Bluefruit colleagues weighed their choices and sent in their votes. Everyone had the opportunity to rank in order of preference one or more of the candidates available. We had a high voter turnout, with more than 75% of colleagues casting their votes.

That Friday, we were able to announce our first two employee trustees. 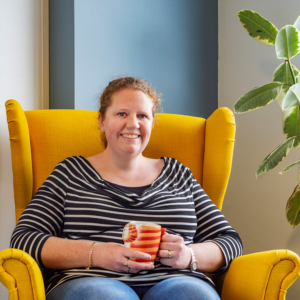 Judith leads our first, dedicated, software tester team at Bluefruit. When campaigning, she talked about how her experience in cross-team relationships would make her a good fit for the Trust. Now two months in, Judith is putting that experience to work.

“It’s early days,” explained Judith, “and in some ways, we are still finding our feet, but the governance of the business with the EOT as part of that process is a major change to how we do things. There’s a lot to organise, but we’ve already made important decisions that have benefitted everyone who works at Bluefruit.” 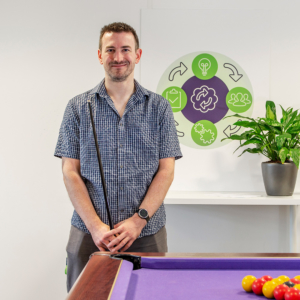 Richard leads a team of software engineers and testers at Bluefruit. During the election, he was keen to point out how he wanted to ensure that the EOT upheld Bluefruit’s vision. Our vision is that a happy workforce leads to successful projects and satisfied customers.

“It was great being able to deliver an end of year bonus to everyone at Bluefruit,” said Richard. “I’m looking forward to working with the EOT and our Board of Directors to ensure another successful year.”

Bluefruit Software and employee ownership in 2020 and beyond

The EOT still has work to do in establishing its operating parameters and maintaining an open dialogue with our Board of Directors on critical business matters.

“We congratulate Bluefruit Software on its transition to employee ownership supported by EOA Member Stephens Scown. By widening ownership of the business to its employees Bluefruit Software is securing the future of the business, including its ethos, values and employees, while rooting itself locally for the longer term to the benefit of the communities which it serves.”

If you’d like to learn more about what it’s like to work at Bluefruit Software and what the EOT means for colleagues, check out this video: