By Paul Massey, Founder and Director

In October, Bluefruit Software took a big step. We formed an Employee Ownership Trust (EOT), and now 51% of the business is owned by employees.

Forming the EOT means that my wife and I have sold just over half of our shares to the people who make Bluefruit such a successful business in the first place. It means that our people have a “significant and meaningful” stake in our company, by having shares in it and a say in how we run it.

But how did we get here? Why did we start an EOT? Why now?

That’s what I want to talk about. 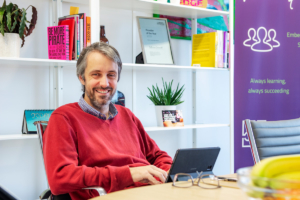 I founded Bluefruit Software 20 years ago. Back then, we were called Smart Software (we’d later go on to be called Absolute Software and then settled on Bluefruit Software), and it was just me in my spare bedroom. As I grew my business, we moved into an actual office and started taking on staff, and then moved the company again. We’re now spread over three floors of the Gateway Business Centre in Redruth, working with clients in a staggering array of industries.

I’ve gone from working for myself to working with over 70 people who embody what makes Bluefruit such a fantastic place to work.

But despite all this success, people would frequently ask me, “What’s your exit strategy? You need to be thinking about the exit strategy. How are you going to realise the value of your business if you don’t have an exit strategy?”

My answer, until the past year, has always been, “There’s no exit strategy, I’m going to work here forever.” Why? I created the business to create an excellent workplace; I didn’t create it as a way of selling out for a big payoff.

Forming the EOT has become part of my “exit strategy”. Just not in the way most tech company founders think of their exit, and I’m not going anywhere else soon.

Before the spare bedroom

At seven years old, I’d play around with my family’s Commodore 64 all the time. I played computer games on the system. But I’d also buy computer magazines and then type in the programs detailed in those magazines. The programmes enabled me to hack the computer games that I spent so much time on.

As I got a little older, I got more into it. My Grandfather persuaded me to take computing more seriously. He was a bit of a hobbyist with computers as well. So, I started to do some more geeky things and looking at the electronics around computing.

I got my first job writing code for a Cornwall-based engineering company, programming in C. They took me on after I’d completed work experience with them, but for electronics. It was just a weekend and holiday job, but I was programming at 16 while doing my A-Levels.

My A-Levels, however, didn’t include computing or computer science. Instead, I did well in maths and physics, to the extent that my college encouraged me to study physics at Oxford. Programming, though, was what I enjoyed, and I ended my first year at university and realised that I had made a mistake by going to university.

So, I returned to Cornwall and started a career in computer programming. I was 19, studying electronics part-time, already with several years of commercial experience under my belt. Working for the same business I had done work experience with before I decided I wanted to start my own company.

A business that works with people, not against 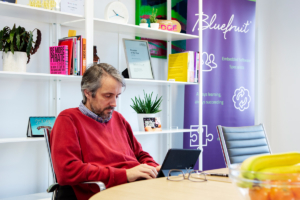 Minus a degree, there were limited options for me to grow in my career. Especially in Cornwall—the technology scene some 20 years ago is very different from what you’ll find in Cornwall today. But if I started my own business, my options were far broader.

Another driving factor for me to step out on my own was that I was not a fan of the culture where I was working.

I started my own business using the connections I’d formed in the seven years of coding I had done. And I made it my mission from the start to do things differently. I was going to put people first.

I had this vision that having a happy workforce would lead to successful projects, which in turn would mean we would have satisfied clients. I felt that starting from the basis of how we can make a business work in a way that’s low stress would enable my vision to happen.

So, no long work hours—no crunch. We empower people—not the command and control environment of many businesses. By at least doing these things, we had the chance of gaining better results, and you know what?

We ended up with better results when we created a positive culture with a healthy work environment and empowered happy staff. All of this naturally reflected vital principles that would later become part of Agile. When Agile came along a few years later, it made sense for us to adopt those principles formally as part of the way we worked.

(Agile is a software development methodology that, unlike Waterfall, is adaptive to changing requirements and changing knowledge. It prioritises quality and regular iterative releases.)

This year we’ve been recognised for our culture and how we treat our people. We won Best Workplace at the Cornwall Business Awards, and just last week picked up Best Tech Workplace at the Tech South West Awards.

But that exit strategy

My wife and I have been the shareholders of Bluefruit since the start. We’ve borne the risk, and things haven’t always been rosy—it’s a lot of financial responsibility to carry—but we stuck through and helped the business grow. This year Bluefruit was also named Cornwall’s Growth Business of the Year at the Cornwall Business Awards.

But even though I didn’t have an exit strategy, I realised through general business strategy sessions with our board members and non-executive director that I wanted to make the business less reliant on me financially. I wanted to be able to flex what my role was within the company and so make it more technical if I wanted to spend time being more technical, which was a personal goal.

Then there was a realisation by the board that we wanted to see how we could make this business last a long time. That goal posed an exciting challenge because it’s not one that is often considered by business leaders today. Few think about how to preserve the business and its culture in the long term.

We wanted to look at ways that we could share some of the benefits of the business with employees while continuing to grow. Achieving the kind of growth where we remain a safe choice for our clients’ projects, but we can build and maintain our culture. And we had already started looking at the idea of share schemes, but it didn’t quite seem to fit, so we created a spec list of what we needed.

A chance conversation between Robert Salvoni, our non-executive board director, a friend (Simon Blake) who works at London accountancy firm Price Bailey, and another acquaintance, gave us the idea of forming an Employee Ownership Trust (EOT).

Building the EOT at Bluefruit

Many businesses decide to form an EOT to fix a part of their existing culture. Bluefruit didn’t have any of that cultural work that needed to happen. We already had a positive culture that we wanted to enshrine. That meant that we could go through the process, perhaps a bit quicker than other businesses.

From end to end, it took just over six months to build the EOT. Many businesses we spoke to said they’d spent two years working through the cultural changes as well as the legal changes. Our challenges instead have been articulating and capturing what we wanted to achieve in a formal governance framework. Thanks to superb legal and accounting advice, we were able to get to a point where we were ready to launch. 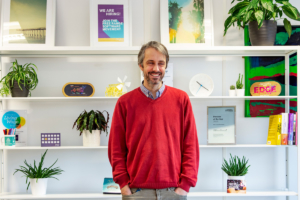 The EOT offered us the chance not just to crystallise some of the personal value that we’d invested, but to share the business’s success and to enshrine the culture into the governance of the organisation. When a company is going through a period of enormous growth, it can be challenging to hold onto the culture that made the business successful in the first place.

Forming the EOT to emphasise what we have, it’s lessening the impact that as we grow, and grow more formal governance overall, that we didn’t lose what was right in our culture. That we could keep our core beliefs that happy employees mean successful projects, which in turn means happy clients.

The EOT means Bluefruit’s future is no longer tied to mine—it’s a way of the business surviving beyond me.

Our business strategy makes quality, growth and resilience key imperatives for the entire organisation. The EOT enables us to advocate growth and drive quality; because having part ownership of the company means our employees are motivated to care about what they’re doing. It brings resilience because we’re not having to seek external investment to keep Bluefruit running.

Finally, I’ve wanted to make Bluefruit into more of a legacy. When I decide in 10, 20, 30 years that I want to retire or do something else, I didn’t want to be at that point of having to decide to sell out to a competitor or a customer. That would have been a significant risk to our clients and jobs here. Bringing the EOT together means that our clients are now dealing with a business that has the structure in place to be here for many years to come.

The EOT is the right choice for Bluefruit

If this had been three or even two years ago, I don’t think the EOT would have been the right choice for us. But now, thanks to the people who have helped our business grow, it is.

I want to leave you now with a few more thoughts on our EOT from myself and colleagues:

From medtech to aerospace, industrial to automotive and more: we have the engineers and testers that you need for your project. Please give us a call or drop us an email and we will set up a time to learn more about your requirements and how we can help.